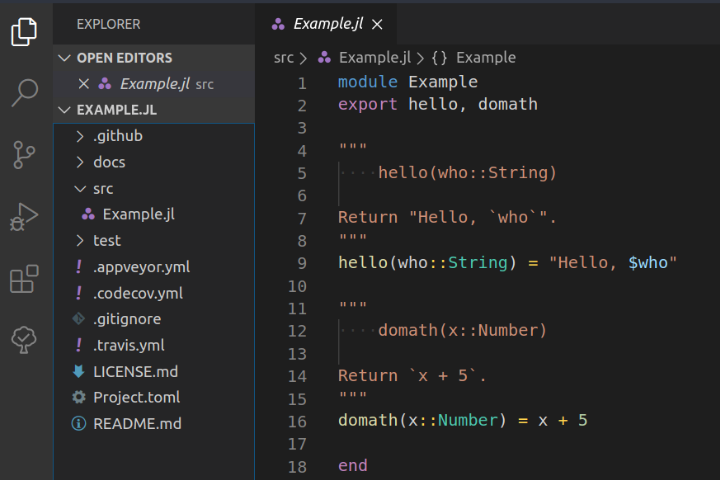 Software engineering is a discipline of principles and practices designed to improve people’s ability to create and manage complex software projects and collaborate with others on developing them. People have built software tools to assist with these principles and practices. This article focuses on exploring the essential practices and principles, and related tools, for scientists who wish to write code that other people can understand, use, and collaborate on developing. For those who wish to take a deeper dive into software engineering, the Software Engineering book1 covers the discipline in detail.

An essential feature of an operating system is the filesystem. Filesystem enables us to store data in files and create directories for grouping files into separate collections. Directories are hierarchical, that is, we can create directories inside other directories. We also need to distinguish between two types of files; text files and binary files. Text files are human-readable files containing only text, and we can open them using a text editor. Binary files machine-readable files stored in binary format, and therefore require specific software for opening them. An executable file is a binary file that executes a program when opened. Filename extensions, such as .txt or .pdf, are used to indicate different filetypes. Sometimes, files do not have a filename extension, in which case they are often text files or executable files.

Understanding the filesystem is essential because fundamentally, a software project is a directory named after the project that contains files and directories specific to that project. Most of the contained files are special text files referred to as source code. To edit source code, we can use a code editor. Code editors offer tools that assist in writing source code, such as syntax highlighting, code analysis, and other integrated tools. We may also refer to them as integrated development environments or IDEs for short. We recommend Visual Studio Code or JetBrains' editors.

With version control, we can track changes that we make to the contents in the project directory as we start developing the project. We refer the project directory initialized with version control as a repository. The defacto software for version control is Git. Git allows creating repositories, recoding changes, tagging specific points in a repository’s history, branching, and collaboration. Branching refers to diverging from the main line of development and continue to work without messing up the work in the mainline. The Pro Git book covers details on everything Git related. 2

Services can host repositories on the internet, which makes collaboration possible. We refer to these repositories as remote repositories. The most popular service for hosting Git repositories is GitHub. Github also has features for issue tracking, code review, and hosting documentation.

Also, there exist graphical user interfaces for Git. They help to interact with Git, visualizing repository changes, and change history. We recommend using GitKraken. Also, many code editors and IDEs bundle a user interface for Git.

Here are use cases of some popular programming paradigms:

As the project starts growing, it becomes necessary to verify that the program functions correctly. Unit testing is one method of verifying correctness. Unit testing refers to the testing of individual components of the program by writing test cases for each of its constituents. We can also measure the percentage of the source code being tested by the unit tests, which we refer to as code coverage. Typically, programming languages include libraries and conventions for performing and writing unit tests and measuring the code coverage.

When releasing software to the public, we need software versioning. Versioning refers to assigning unique version numbers in increasing order to mark new developments in the software. It is necessary for ensuring compatibility with other software. We call these version numbers release versions. They follow semantic versioning where we write version numbers using convention major.minor.batch. 3 Versioning on different programming languages is done using the standard library or with the aid of a third-party library.

Each coding cycle consists of the following steps:

We implement a part of the feature, such as a function or a structure, during each coding cycle. We can either create documentation and test for the parts immediately or wait until the whole feature is ready.

A simple feature cycle without branching proceeds as follows:

When working alone, we can make all the changes in the master branch since no one else can push a conflicting commit during development. However, it is not feasible to collaborate effectively without branching.

A simple feature cycle with branching proceeds as follows:

When collaborating with others, it is useful to create a feature branch that allows development without conflicting commits on the branch. We have to resolve the conflicts only once we merge the feature back to the master branch. It is good practice to keep the features as small and contained as possible to avoid having to resolve lots of merge conflicts. It also makes merging easier for other developers.

Each release cycle releases a new version of the software. It proceeds as follows:

Now, the release tag is visible in the repository’s commit history.

Finally, we set up a continuous integration service to monitor changes in our remote repository. Pushing a commit to the remote repository invokes the continuous integration service to run automated processes such as building the software, running tests, and building documentation. If the commit is tagged with a version number, indicating a new version release, it may invoke additional processes such as distributing the software and documentation to users.

I wrote this article based on my experiences of applying software engineering principles, practices, and tools in developing software packages for scientific projects.