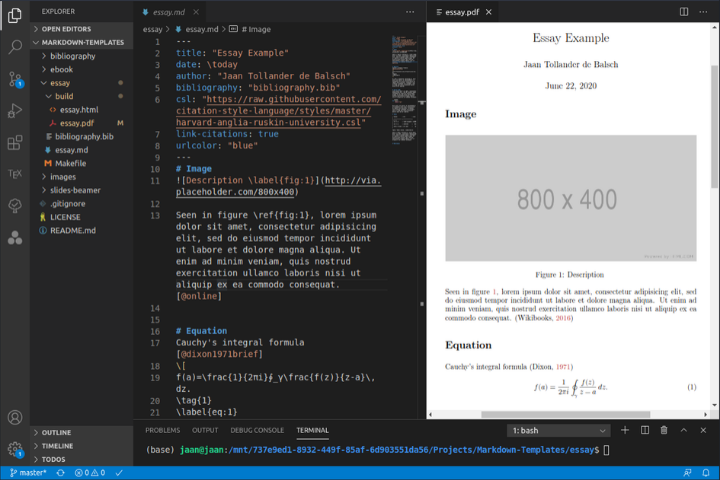 This blog post covers how to use Markdown for scientific and technical writing, which often involves writing equations, code blocks, citations, and other unique features depending on the document in question. We have included software recommendations for writing and converting Markdown it into other formats such as HTML (blog posts, slides, documentation), PDF (essays, reports) or EPUB (books). For example, I wrote this blog post using Markdown.

Markdown is a lightweight markup language with plain text formatting syntax, created for creating web content such as emails and blog posts (HTML), but can be converted into other formats such as PDF via tools like Pandoc. I use Markdown due to its popularity, simple syntax, and availability of tools that can convert Markdown into other formats.

Unlike word or google docs, Markdown is written in a plain text document and then converted into the final format. Markdown is not the best choice for documents that require lots of small customizations in styles, fonts, or outlook. For example, it is easier to writen a resume using Google docs because the customizations with colors, indentations, and fonts would be a real hassle using Markdown. On the other hand, Markdown excels at creating documents that need little customization or have premade styles available such as reports. Markdown is also among the easiest ways to create web content.

We can use Markdown for writing many different types of documents. The most common use case is to write web content such as blog posts, but writing essays, research papers, books, documentation, slides, among many other types are possible. I made GitHub repository Markdown Templates that contains example documents. The examples are structured as follows:

The following sections cover the required software and the basics of Markdown syntax.

To get started writing Markdown on desktop, we need to download software for writing and converting Markdown into documents.

For writing Markdown online, for example, edit Markdown file inside Google Drive can try StackEdit, or for emails, there is browser plugin called Markdown Here.

This section covers the basic syntax of Markdown and specific features for scientific writing such as syntax highlighting, equations, and citations.

Demonstrations about the basic Markdown syntax can be found from John Gruber’s original spec or Markdown Cheatsheet in GitHub. I recommend reading at least Markdown-Cheatsheet to understand the basics. In addition to Markdown understanding, basics on HTML can be useful for creating web content if using inline HTML.

which in HTML will be displayed by Mathjax as

Another feature that can make writing complicated equations easier is using unicode characters for mathematical symbols. For instance \[ 𝐱 ∈ ℝ^2 \] can be rendered by Mathjax

In order to easily input these mathematical symbols install Atom package latex-completions. A mapping between corresponding Unicode characters and latex commands can be found at unimathsymbols.txt.

Citations can be used inside Markdown by using pandoc-citeproc library, which included in the Pandoc installation. To use pandoc-citeproc Pandoc needs to be invoked using options.

Online resources such as websites are stored using @online

These entries can be referred to using @key_name. The full Biblatex reference documentation can be found from biblatex.pdf.

Optionally citation styles can be changed using the option --cls=FILE. Citation files use Citation Style Language (CSL). Different citation styles and examples of them can be found from Zotero Styles. In order to use these styles, you can either download them or refer directly to the raw CLS file in Citation Styles (GitHub).