Computer Algebra With Sympy and Jupyter 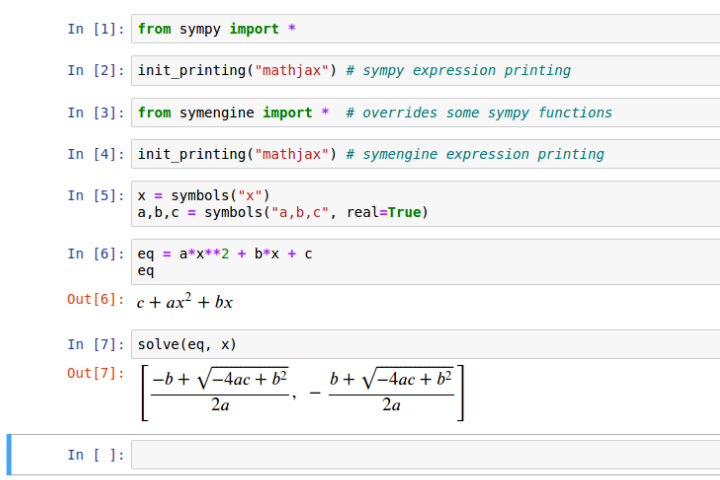 First off, we present some relevant definitions related to the topic of this article.

In the next section, we will discuss the differences between manual and computational algebraic expression manipulation.

The emergence of computers in the 20th century has spiked an interest in algorithmic manipulation of mathematical expressions. The development of algorithms for performing algebraic manipulations has allowed a computer to perform this task. These algorithms are then bundled in computer algebra systems and made available to users.

We have listed some of the benefits of the use of computer algebra systems below.

However, computer algebra systems are not without their challenges.

In conclusion, we will still need to rely on a hybrid approach where we combine manual and computational work. As technology improves, we can perform an increasing quantity of our algebraic manipulations using computers. In the next section, we discuss open-source computer algebra systems and how to use them.

This part focused on open-source software for computer algebra. We will discuss how to use the Jupyter notebook and Python programming language with the SymPy library. Additionally, we install the SymEngine library for improved performance of symbolic operations. Each of the software can be installed using the Conda package manager.

Now we are ready to start working with SymPy. Take a look at the SymPy examples Jupyter notebook. It contains a showcase of the essential SymPy features.

SymPy and SymEngine is also available for Julia programming language through the wrappers Sympy.jl and SymEngine.jl. Julia kernel can be added to Jupyter using IJulia.jl package.