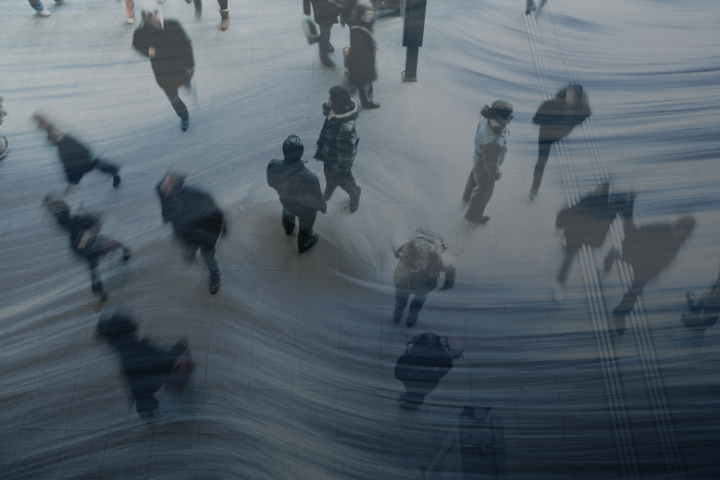 We define crowd dynamics as the movement of crowds of people in respect of time. We implemented the simulation model using a continuous-time, Newtonian mechanics with an agent-based model, where each agent is a rigid body, in a two-dimensional lattice. In the model, the agents are intelligent self-propelled particles, whose movement is produced by non-physical and physical forces. The non-physical forces are referred to as social forces, for example, the desire to move toward a goal or collision avoidance. Hence, we refer to the model as the social force model, a term originating from 1.

There also exist other types of models, such as cellular automata which models agents as an occupied or unoccupied cells in a discrete lattice, that is, a grid, and continuum-based models which model the crowd as a continuous mass. The agent-based model has the advantage of being the most realistic model, but it is also computationally the most challenging model.

There are real-life applications for research on how crowds of people move, for example:

The authors of the book 2 give a comprehensive look at the subject of crowd dynamics.

In the following sections, we are going to explain in-depth the mathematics behind the agent-based model and how to implement the simulation.

We use these geometric primitives for implementing some of the objects in the simulation.

We will refer to the collection of objects that exists in the simulation as the field. The field consists of the following objects:

In the agent-based model, each agent is a discrete object, modeled as a rigid body. We use two models for modeling the shape of the agent; circular and three-circle, models. In addition to shape, agents have other attributes such as mass and desired velocity.

In the circular model, we model the agent’s shape using a circle. It is the simplest model and rotationally symmetrical. It is easiest to implement and compute and work well for sparse and medium-density crowds. However, it is not a very realistic model of the cross-section of the human torso. In reality, the human body is narrower and can fit through smaller spaces. In dense crowds, the circle model can result in artifacts and unrealistic density measures.

Each circular agent $i∈A$ has the following attributes.

The three-circle model consists of three circles representing the shoulders and midsection. The three-circle model is a more realistic representation of the human cross-section. However, since it is not rotationally symmetrical, simulation mechanics become more complex. For example, the model must include rotational motion and more complicated collision detection. In dense crowds, agents can move sideways, which requires solving desired body rotation. 3 4 5 6

In addition to the attributes of the circular and rotatable agent, each three-circle agent has attributes as follows.

We define the relative position $\tilde{𝐱}$, relative velocity $\tilde{𝐯}$, skin-to-skin distance $h$ (can be negative), normal (unit) vector $\hat{𝐧}$ and tangent (unit) vector $\hat{𝐭}$. We use these variables for computing the interaction potentials. We use $R(ϕ)$ to define the rotation matrix in two dimensions where $ϕ∈[0°,360°]$ is the angle in degrees.

Between Circular Agent and Line-obstacle

Now, we determine the relative position of the center of mass compared to the line segment. We have three distinct cases:

We define the variables as follows: Skin-to-skin distance is

Fluctuation force is a stochastic force analogous to heat in particle systems. It accounts for the lateral movement of the agents and breaks symmetries in the simulation. $$ \mathbf{ξ}=ξ\hat{𝐮}(φ) \label{eq:4} \tag{4} $$

The social force between agents accounts for collision avoidance. The original social force model used social force only dependent on the distance between agents. However, 7 8 introduced a more realistic, statistical mechanics-based approach for modeling this interaction. The interaction depends on the linearly estimated future positions on the agents, which takes into account the positions and velocities of the agents. The authors derived it from a pair-wise interaction potential that follows the power law, and it is backed up by experimental data. The potential is defined $$ E(τ) = m \frac{k}{τ^2} \exp \left( -\frac{τ}{τ_{soc}} \right), \label{eq:5} \tag{5} $$ where $k$ is a social force scaling coefficient and $τ_{soc}$ is the interaction time horizon. The time-to-collision $τ$ is obtained by linear extrapolation of the current trajectories of the agents and solving the root for skin-to-skin distance $h$ as a function of $τ$ between these agents. The resulting $τ$ is a function of the relative position $\tilde{𝐱}$. We can derive the corresponding force by taking the spatial gradient of the potential $$ 𝐟_{soc} = -∇_{\tilde{𝐱}} E(τ) = - m k \left(\frac{1}{τ^2}\right) \left(\frac{2}{τ} + \frac{1}{τ_{soc}}\right) \exp\left (-\frac{τ}{τ_{soc}}\right ) ∇_{\tilde{𝐱}} τ. \label{eq:6} \tag{6} $$ If $τ$ is not defined, the force $𝐟_{soc}$ is equal to zero.

In this simulation, we handle the psychological avoidance of obstacles by altering the agent’s desired direction away from obstacles if they get too close. We handle the pathfinding by assuming that agents follow the shortest path to their targets, taking into account the finite size of the agents. The approach is computationally efficient since we have to compute the shortest path only once. 9 10

We can solve the Eikonal equation using existing algorithms, such as Fast Marching Method.

We will set the avoidance radius $r$ sufficiently larger than $\max_{i∈A} r_i$, which ensures that agents tend away from the obstacles.

We can also use a piecewise linear function such that $λ(r)=0$. Then we have $$ λ(x)= \begin{cases} -x/r+1 & x≤r \\ 0 & x>r \end{cases}. \label{eq:19} \tag{19} $$ This formulation is also a logical choice since the smoothness of the exponential formulation does not bring any additional value in the agent-based simulation.

To find neighboring agent pairs within distance $r$, we can use fixed-radius nearest neighbor search. In particular, we use the cell lists algorithm, which improves the difficulty over brute force, from $O(n^2)$ to $O(n).$ Agents are required to have two properties:

Because computing the total force on the agents is computationally expensive, we will use the first-order integrator. We chose to use Verlet integration with adaptive timestep $Δt$.

The adaptive timestep helps to avoid numerical errors in the simulation.

We have experimented with the algorithms in the crowddynamics library and verified that they operate correctly. However, based on the experiences of implementing the library, we learned that creating large, complex simulations is implausible without a graphical user interface (GUI) and extendable program architecture. For example, if we wish to create and edit the field, logic, and set initial parameter and attribute values graphically, we require these features. For this reason, we advise building the simulation on top of existing software, such as a physics engine or game engine. We have the following suggestion for the software features required of this software.

The programming language choice depends on the chosen engine. Engines typically use C++. Also, installation and getting started should be made as easy as possible to attract users outside the research community.

In reality, human movement can be very complicated. For example, the motivation to move to a specific direction can be affected by many factors, such as sensory inputs and internal motivations. It would be difficult and even undesirable to attempt to model all the aspects of human movement. Therefore, the models we have presented in this article focus on capturing only the essential aspects of the human movement. It requires making simplifying assumptions in the models.

The results from simulations are stochastic. Therefore, we need to run multiple simulations with different initial configurations and analyze the resulting data using statistical methods to obtain meaningful information.